Galway, Dingle and the Cliffs of Moher

Coming from Croatia and Italy, I knew it was going to be colder in Ireland, but I wasn’t expecting how much colder it was going to be. On the plus side, it was so cold because it was a beautiful, sunny day. I’ll take cold over rain anyday! After a confusing start trying to find our rental car, we headed west on the three hour drive to Galway. The drive itself was on a mostly straight, two lane highway. So easy driving, though to be honest, there wasn’t a lot to see.

Our accommodation for the night, Sunrise Lodge B&B, is located about a 15 minute walk from the town centre. Seeing as most (if not all) the houses on the street were B&Bs I affectionately referred to this street as ‘B&B Row’. We had a lovely view of the bay from our second storey window. By the time we’d arrived in Galway it was early evening, so we dropped off our bags and walked into town. As this was my first taste of Ireland, we walked around the town centre, but wanted to really taste Ireland and found a pub serving Guinness (though I think they all serve Guinness, so it wasn’t that tough to find).

The pub was pretty much the epitome of what I was expecting in an Irish pub, complete with live music. We had the standard fare of Irish stew / roast and gravy / <fill in typical Irish meal here>.

In the morning we had a lovely breakfast prepared and served by the (slightly eccentric) owners. A very lovely couple, but a bit odd. Would definitely stay here again, if only to have another conversation with the owner!

Trying not to fall off the Cliffs of Moher

This was going to be a decent day of driving, so we had an early start. We followed the main road southwest towards Doolin, arriving at the Cliffs of Moher by late morning. It was another beautifully sunny day, but extremely windy. Being the typical Aussie he is, Jarrad was wearing thongs (flip flops) and was walking along the path that goes precariously close to the edge of a 200m drop. Did I mention it was extremely windy! I looked at the other tourists and he was the only out of a couple hundred wearing sandals. It was October after all! 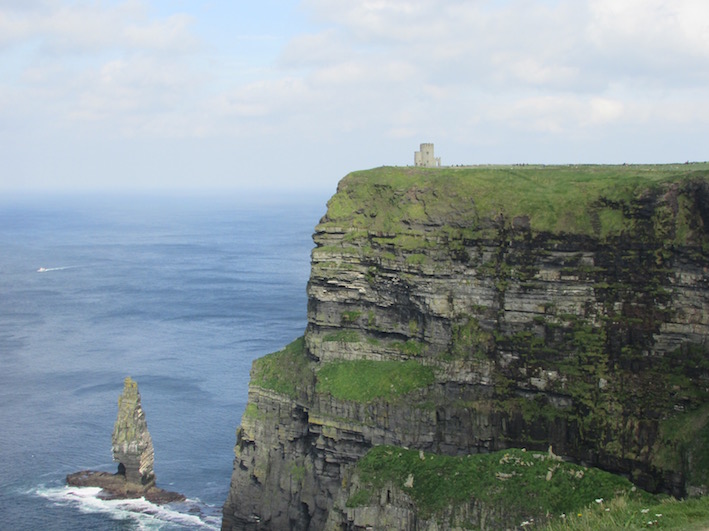 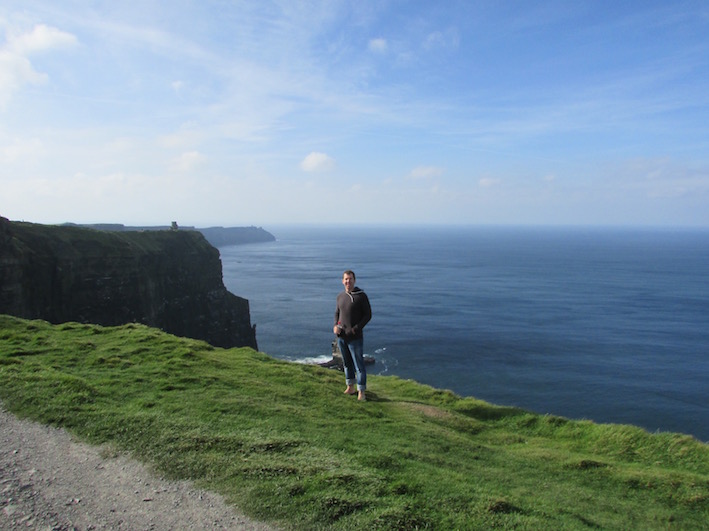 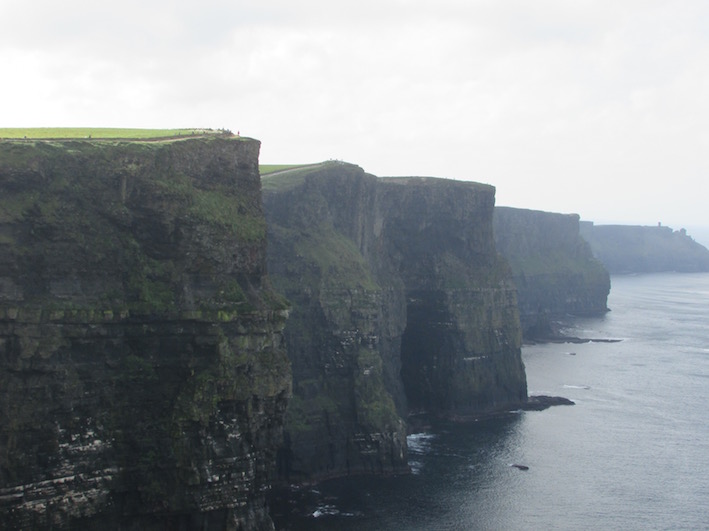 While you could easily spend the day walking along the cliffs in either direction, we only stayed for a couple hours. By that time I was pretty cold and ready for a hot beverage. Fortunately there’s a small café in the gift shop and most people seemed to be leaving with hot drinks.

After cranking up the heat in the car, we continued south, arriving in what has to be one of the world’s cutest towns – Dingle. This is the town that has the famous (or at least cover of Lonely Planet famous) picture of multi-coloured pubs all in a row, which of course is where we chose to eat dinner. After perusing all the menus which are posted out front, and let’s be honest, are pretty much all the same, we chose John Benny’s Pub  based on ‘the vibe’. It was packed and they had live music. I was starting to get used to having live entertainment at meal times.

However I can’t forget to mention the highlight of Dingle, if not the trip, was having a our couple of pints at Dick Mack’s Pub. It’s a former shoe shop owned by the current owner’s grandfather. A lot of the original equipment is there along with a large amount of collectibles. It has to be one of the most unique pubs I’ve ever visited. My favourite part was the original partition that was erected back in the days when women and men weren’t allowed to drink together. So the women would sit on the other side and have their drinks (without being harassed by drunk men, I would assume!). The crowd was a bit older and the bartender was having lots of chats with the locals. A must-do if you’re in town!

We stayed at the Lantern Townhouse in the town centre. There was nothing overly special about it but it was inexpensive and quiet, though didn’t serve breakfast.

One week in Ireland

Driving the Ring of Kerry

I'd love to hear from you. Add your comments to the discussion below! Cancel reply